Racecourses and Racetracks in Truro

Be the first to review

Show me directions to Tipster Master

My name is Allan Moore. I have been backing horses for profit for more than 40 years. In 1995 I created a horse racing software program for a company called Elswick Enterprises. The program was very successful and was entered into the Smart Sig Computer Challenge going up with 20 or so other program from various companies. The competition was 6 months long our program "The Sword" was the only program that made a profit. It made +14% after 10% betting tax. Now we are way ahead
(Remember those days!)

After that I created the "Majestic" programs using my "Impact" ratings Ai and a pattern Array Ai. This was a step towards horse racing prediction using artificial intelligence. Again the program was very successful, particularly in 10f flat non handicaps of grade B (2) or higher. The intelligence was upgraded regularly with the results and the system grew from strength to strength. I decided I wanted to give a speed element to the program and developed another program called "MPH". This program was the perfect marriage to Majestic, particularly over the Jumps. It gave speed figures in Miles Per Hour.

Eventually however the CEO of Elswick Enterprises retired and the company was closed. This brought an end to my programs. However I have provided subscribers of my service with very many profitable wins since then.

Whilst every effort is made to ensure that we achieve as much success currently as we have in the past, we cannot guarantee the future and no past results achieved, no matter how good, prove that the same will happen in the future. Whilst we expect that we continue to achieve good results the responsibility to bet or not lies with you and we do not accept responsibility for any losses incurred. We promote responsible gambling and do our best to achieve the best possible results.

How to beat the bookmaker

In order to beat the bookmaker you need to understand how he makes his money. He uses a system called "Wisdom of the Masses" theory. Imagine a jar of marbles, the task is to guess how many marbles are in the jar. If you get a lot of people having a guess and average out the answers you will find that the average is guess is very close to the actual number of marbles. The more guesses the more accurate.

In bookmaking this is essentially the same, where opinion and thereby the weight of money determines the "guesses". The result is the SP's over many races are very accurate expressed as percentages chances of a horse winning. It won't be 100% as the bookmaker adds his "over-round" or profit margin. Which every horse wins, in theory the bookmaker will win. Of course in some races the market is skewed and the bookmaker can be out of pocket on a race but taken over many races he is not.

You can see from the above that you should NEVER bet at SP. BSP is over-all a lot better than SP because is pairing many backers and layers but you are essentially giving power to your opponent. BSP works best with drifting horses, these horses are usually much better priced than SP. Taking a price over all is the best strategy however, especially if you take the BOG (Best Odds Guarantee) price. However it is only better than taking non BOG price when the horse drifts. Often a non Bog price is better than what Bog has to offer. 75% of winners contract in price over time and only 25% of winners drift. So in order to get the best out of Bog or BSP, over taking a better price that is non Bog if A, the horse wins AND drifts. When your winning the first thing a bookie will do is take the BOG away from you. That's fine really, don't worry too much about that.

Remember what we said about winners, most of the time they contract in price, so you don't want to be one of those cheerful chappies who like to put a bet on with seconds to go! No, we want our bet on as early as possible because it almost certain the SP will be much shorter and the closer to the race it gets, the shorter the price will be. So we get on as early as we can. I send my selections out the night before racing, in this way we catch the best prices most of the time, and hey, if it goes out and we took BOG then great.

I have been closed down from a few places, including Betfair! I think for winning multibets on the exchange because they pay that, not other punters. Though they gave a different untrue reason.

It is important not to bet at the same bookmaker too often and spread your stake around and use the shops as well but again move around. Of course when you get to large stakes, you can bet on course or have an agent do it for you. On course you can get very large bets on. If using the exchanges it is better to take the price than rely on BSP or similar on the other exchanges. I found that smaller stakes on the exchanges pays much better than Bog or Bsp. The best time is usually about noon in summer.

Bog is NOT always the best price, I use it as a measure because it is easily gained because usually 3 or bookies offer the same price, whilst going for a better non Bog price ends up with messages from punters saying they couldn't get it from time to time.

The point is always to take a price......if you end up getting an average price 20% or more better than SP, you shouldn't have any problems. Notwithstanding that, you can win at BSP but less at SP and of course you don't have to worry about the price or getting on. Some people won't do anything other than BSP but most of the time Bog or simply taking an early prices is way better, BSP catches up when it lands that longshot at much better odds than SP.

Next we have to consider personal qualities, winning is great but we have to be careful not to get ahead of ourselves and start increasing stakes too early and or by too much. Green and Fear can ruin your chances even with very profitable methods. As sure as night follows day, losing runs will follow winning ones and vice versa. You have to have patient and tough and have a bank big enough to ride out a downturn. I would like to tell you that the road to pro betting is smooth and that every month you will win but that would foolish. Whilst we can project future returns and strike rates based on the past we cannot ever predict how the results will fall. Even with a 50% strike rate you can get 10 losers in a run and the lower the strike rate is the longer the losing runs can be. None of this really matters if you have the qualities required. It is the bottom line that counts, not strike rate, not losing runs. Just your points profit over time. Our aim is two fold. For all, to make a good profit by seasons end and for the newcomer to get to meaningful stake. Be patient, be sensible and try to stay detached from results. Enjoy your racing by all means but don't get stressed when that cert decides he can't jump a fence without ditching his rider or sees the stables and runs out. Sometimes horses are just not with it on the day and don't run to form and other times an outsider with seemingly no chance romps home. That's racing. It doesn't matter, its just the way the game is. What matters as I say is the bottom line, the season end result, the cash in your pocket, not the day to day ups and downs.

I have given an illustration of starting with a 50pt bank, if that's all you can start with then fine, but 75 is better and when you "get there" keep a 100 point bank.

There are currently no reviews for this company

Leave your review of Tipster Master

All fields are required. Your review will appear immediately.

Thank you for submitting your review.
There was a problem submitting your review. Please try again later.
Incorrect password. Please try again.
You cannot review your own business
Reviews are limited to one per user and you have reviewed this business before.
The email address you have entered is already registered. If you have forgotten your password use the 'Forgotten your password?' link to reset it. 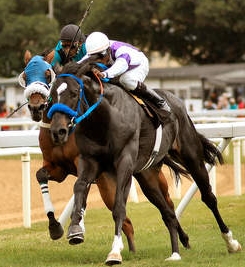